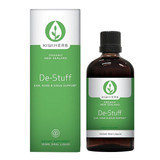 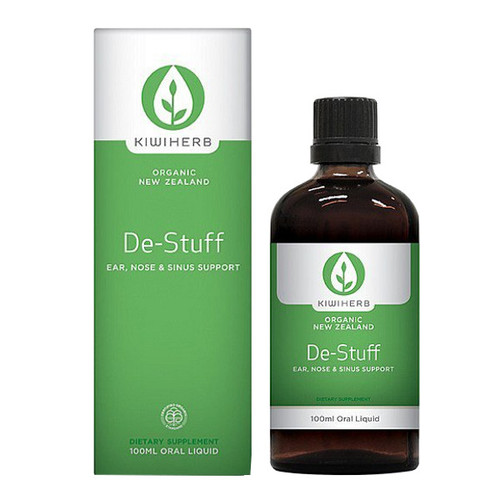 Each 1ml Contains Extracts Equivalent to:

In a base of organic apple juice concentrate.

Adults: 5-10ml
Children 6-12 Years: Take half the adults dose
Take two to three times daily. Dilute in 30ml of water or juice and drink immediately. Follow with a glass of water if required.
Shake well before use.

Kiwiherb products are an essence of New Zealand. Kiwiherb blends the uniqueness of mostly New Zealand grown plants with the ancient wisdom of Rongoa - traditional Maori medicine. Their unique herbal formulations may offer your family support for a variety of health concerns.

Kiwiherb specialises in 100% natural, premium quality herbal health products. Kiwiherb is unique in its commitment to preferentially sourcing NZ-grown and organic ingredients. Their products are formulated by a team of experienced medical herbalists and pharmacists, and are made here in New Zealand under strict quality control so you can trust that every product is of the highest purity, potency, and safety.

Kiwiherb products combine traditional herbal wisdom with modern scientific evidence to provide you with trusted and proven health solutions that work in harmony with the body to achieve optimal health.

Kiwiherb is devoted to quality and this dedication has been awarded by Natural Products New Zealand for several of their innovative topical products, including Kiwiherb DermaCare and Kiwiherb Skin Clear.

Kiwiherb have a children’s health range with the highly reviewed De-Stuff For Kids - Ear Nose & Sinus Support that is created to help with snotty noses and congested ears.

Within their adult range, there are a variety of supplements designed for a number of health concerns such as menopausal symptoms, uncomfortable digestion and aiding liver detoxification.
HealthPost is proud to bring you one of New Zealand’s home grown natural brands.

Each 1ml Contains Extracts Equivalent to:

In a base of organic apple juice concentrate.

4 out of 5
(Out of 12 Total Reviews)
Write a review
Debbie
Must have
Have been using this for my mild sinus for a few years and find it very effective
Kay
Excellent for blocked sinus
Well worth buying. We\&#039;ve used it for years and it often has relieved sore sinus which contribute to sore ears. Thoroughly recommend it.
sew
great product
i have brought this over and over for my son who was born premature (23 weeks) and has tiny tubes so when he gets a cold he is really miserable but I found this product and its amazing.. he hasn&#039;t been to the doctor since I have given it to him.. :) it is really worth trying.. the taste isn&#039;t so bad.. he has it mixed with apple juice..
Rehab
Bad taste
Horrible taste! Not sure if its effective or not as I couldn&#039;t take it
Katy
Nothing else worked!!
The kids and I came down with a nasty bug (flu?) this winter that lasted 10 days and then reared it&#039;s ugly head again a few weeks later. Symptoms included fever, very heavy chesty cough, stuffy nose and major fatigue &amp; brain fog. In desperation I tried almost everything (Apple Cider Vinegar, Olive Leaf Extract, Echinacea, Oregano Oil, Vitamin C, Zinc.....) but it still dragged on. When the 2nd round hit my daughter &amp; I, I gave her the Kids De-Stuff and she recovered in a few days whereas I was still struggling along with little improvement. I finally got the Adults De-Stuff and honestly after taking 2x 10ml doses, I woke up feeling so much better. I finished the bottle and recovered in a few days. WOW!! I felt it didn&#039;t really help with easing the symptoms but aided in a speedy recovery!! The Adult version doesn&#039;t taste very pleasant but my kids (4-10years) LOVE the kids one. De-stuff is now my &quot;go to&quot; product - AWESOME!!
Anita
Made no difference for sinusitis
I bought the large bottle and used it faithfully as directed. It didn&#039;t make a bit of difference to my stuffy nose and sinusitis. This is a very pricey product when considering it recommends 20mil a day and a 100mil bottle at $30.00 makes the cost prohibitive unless it worked amazingly well and you had a good deal of discretionary spending.
Bronwen
No good for chronic sinusitis
I tried this and a number of other remedies to try and do something for my ongoing sinusitis and nothing worked, was hoping for a miracle I guess, but this is not it.
Janette
This product has the most yuckiest ...
This product has the most yuckiest taste! I take it straight and my 2 kids (3 &amp; 5 yrs) also knock it back straight. BUT!!!! Its the BEST!!! This works instantly!! We have this first followed swiftly by the Clinicans Prospan Bronchial Syrup. This is a fantastic combo for all my familys winter illness&#039;s! Thank you so much HealthPost for having fantastic products at a affordable price :)
Tracey
Brilliant product! I also wish it h...
Brilliant product! I also wish it had a dropper, the bottle gets mucky. But it works fast, great for sinus infections.
<< <
1
2
> >>